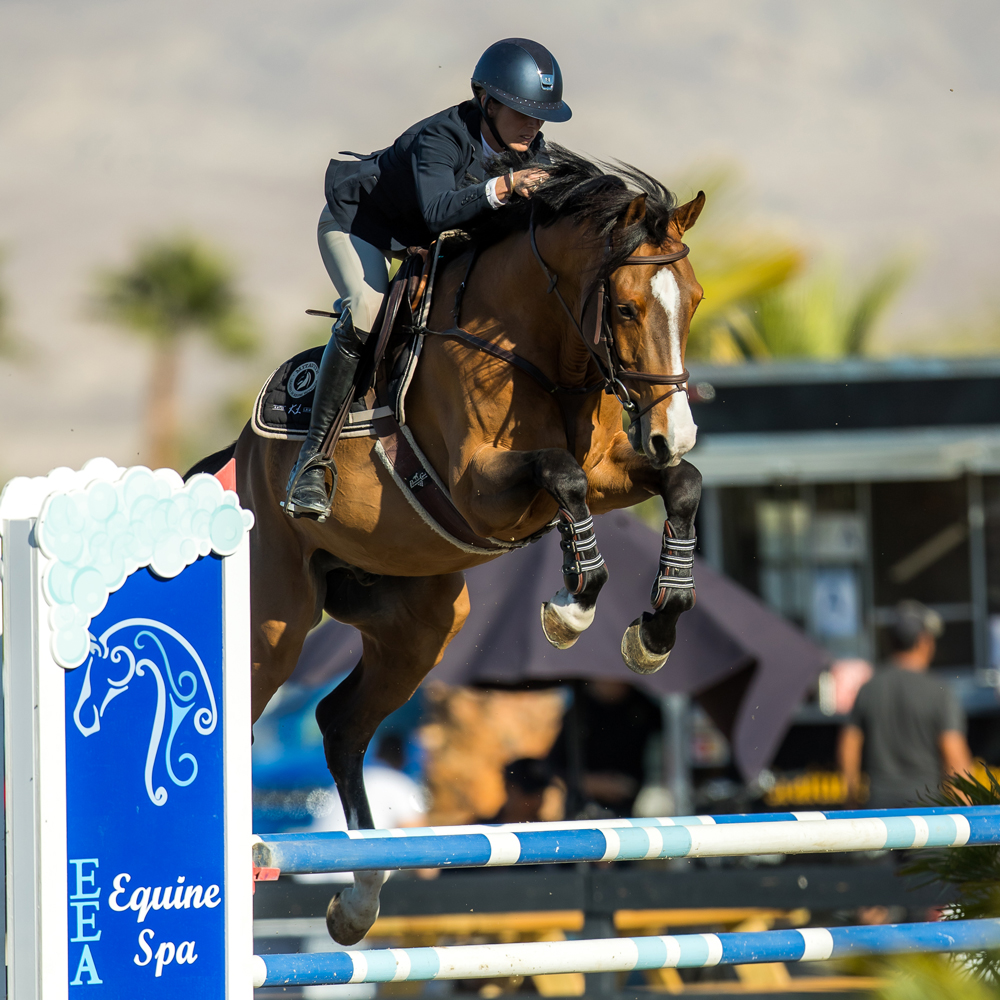 Bio and Performance Record:
Quidam’s Pleasure is an exciting young stallion, with an equally exciting pedigree. As a son of the “Horse of the Century” For Pleasure, with Quidam de Revel, Cassini I and Caretino behind, he is from the best of the best in showjumping blood.

Quidam’s Pleasure is a long legged and modern type sporthorse, with incredible lightness and balance, carefulness and reflexes. His temperment is second to none, with a very willing character, already showing wonderful trainability and rideabilty. Quidam’s Pleasure displays excellent form in freejumping with a classic front end and powerful hindend technique. With his beautiful elastic movement and jumping form, he is a stallion for both the hunter and jumper arenas. His first foals will arrive in the spring of 2020.

Sire: For Pleasure , a stallion with an exceptional international career. He was on four gold-medal-winning teams for Germany; two Olympic Games (Atlanta 1996 & Sydney 2000, he also finished 4th individually), and two European Championships, at Hickstead in 1999, where he was 5th individually and Donauschingen in 2003. In Donauschingen he won individual bronze, the first ever individual medal for Marcus Ehning. He’s also won gold and silver medals at the German National Championships. His career earnings totalled over 1.8 million euros, ahead of Milton, and his offspring have won well over 2.5 million euros among them. For Pleasure’s offspring speak for themselves. He has produced more than 80 grand prix jumpers, with 18 of these being licensed stallions; a total of 70 sons of For Pleasure sons have been approved by various studbooks. Some of his most famous offspring include Fit for Fun, Barron, Flora de Mariposa, Firth of Lorne, Epleaser vt Heike, Ornellaia, For Joy vt Zorgliet, Hello Forever, Funky Fred and the list goes on…

Dam: Greetings from Quidam – Stamm 7126 , a direct daughter of the legendary, Quidam de Revel. Quidame was imported from Belgium in 2009, as a 3 year old mare in foal with her first For Pleasure offspring. Due to her extraordinary genetics, she has been retained as a broodmare. Quidam de Revel is without a doubt one of the most influential stallions of all time, with offspring such as Tlaloc La Silla, Nabab de Reve, Guidam, Verdi, Cirka de Blondel, Quibelle, Quel Homme etc. Not just Quidam, but also his sons and daughters determine in large part the picture of the international scene today in sport and stud. The number of international horses that carry his name in their pedigree is countless.

Charisma de Sjiem, the dam of Greetings from Quidam, is a mare with incredible genetic potential through Cassini I and Caretino, two of the world’s best jumping horse progenitors. Charisma a career broodmare, has now also produced FEI competitors, up to the 1.50m level. Moreover, she is also the full sister of the international jumper Crusado who competed to 1.60m. Her grand dam Chahut is a sister of the international jumping horse Cosima II (Corrado I) who with Markus Fuchs, won numerous 1.60m GP.