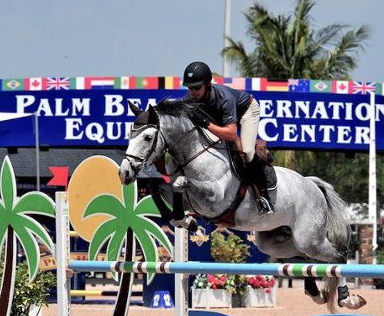 Clair de Lune SE is one of the hottest eventing stallions in the US today. Bred in the US by Rose Sullivan as a showjumper, (Contendor/Calypso I/Alme), it was evident in his early years that he loved to compete in eventing! He transitioned  from eventing with Pan-Am gold medalist Marilyn Little who had 4**** plans for him until he got injured in sport, to 3 time Olympic gold medalist Rich Fellers, where he has started competing in showjumping.

After winning the coveted YEH West Coast Finals in ‘09 with a 87.78% score, and winning almost every event he competed in, through FEI levels, he got injured in sport. In 2009 and 2010 he won the BWP Lifetime Achievement Award for eventing, and the AHHA Performance award for eventing. He was the Winner of the BWP foal futurity prize money in 2012, when two of his weanling colts scored 1st and 2nd in the national futurity.

Clair de Lune SE’s oldest offspring are now competing at FEI levels. Three 8 yr old’s youngsters are at the 3*** (Advanced) level, one mare, Morning Glory SE, being eyed for the next Pan-Ams. He has several competing at the 2** (Intermediate) and many others at Prelim and 1*.

Since 2015, Clair had 2 FEH Grand Champion National finalists, where his offspring have scored no less than 80% and as high as 89%. His son, Cosimo SE, recieved the USEA “Blue ribbon Award” for the most first place wins in one year! In 2020, his son m-Creme de la Creme was awarded the USEA 1st place award for the most points in his division.

Currently Clair is rated the #1 North American bred, and the #3 USEF leading sire for eventing. Clair’s offspring show tremendous talent, braveness and scope for jumping, as well as their sires elegance, rideability and movement.

Also, in the stallion guide, my email is incorrect. It is rsullivanse@gmail.com